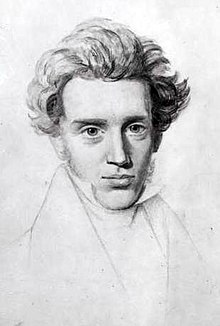 Søren Aabye Kierkegaard (/?s??r?n ?k??rk????rd/ or /?k??rk????r/; Danish: [s???n ?k?i??????????]; 5 May 1813 – 11 November 1855) was a Danish philosopher, theologian, poet, social critic and religious author who is widely considered to be the first existentialist philosopher. He wrote critical texts on organized religion, Christendom, morality, ethics, psychology, and the philosophy of religion, displaying a fondness for metaphor, irony and parables. Much of his philosophical work deals with the issues of how one lives as a "single individual", giving priority to concrete human reality over abstract thinking and highlighting the importance of personal choice and commitment. He was against literary critics who defined idealist intellectuals and philosophers of his time. Swedenborg, Hegel, Goethe, Fichte, Schelling, Schlegel and Hans Christian Andersen were all "understood" far too quickly by "scholars".

Hope is a passion for the possible.

Faith is the highest passion in a man.

Adversity not only draws people together, but brings forth that beautiful inward friendship.

Humor (is) intrinsitc to Christianity.

I do not lack the courage to think a thought whole.

Philosophy is life's dry-nurse, who can take care of us - but not suckle us.

Fate, then, is the nothing of anxiety.

Dread is a womanish debility in which freedom swoons. Psychologically speaking, the fall into sin al ...

Preparation for becoming attentive to Christianity does not consist in reading many books ... but in ...

Backwards understood be only can but, forwards lived be must life.

Irony is a qualification of subjectivity.

Irony is the cultivation of the spirit and therefore follows next after immediacy; then comes the et ...

Irony is the birth-pangs of the objective mind (based upon the misrelationship, discovered by the I ...

That is the road we all have to take - over the Bridge of Sight into eternity.