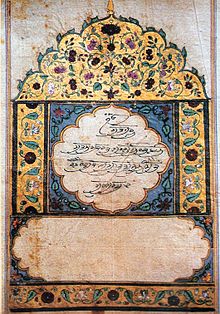 Guru Granth Sahib (Punjabi (Gurmukhi): ???? ????? ?????, pronounced [???u ???nt? s?h?b]) is the central religious scripture of Sikhism, regarded by Sikhs as the final, sovereign and eternal living Guru following the lineage of the 10 human Gurus (Prophet-Masters) of the religion. A text of 1430 Angs (pages), composed poetically to various classical Ragas, it consists of Baani (spiritual revelations) describing the qualities of God and the necessity for meditation on God's n?m (holy name) as a means to harness God-like qualities, leading to a reunion with the creator. Described as a "universal revelation", a text that speaks to the "hearts and searching minds of persons belonging to any religion or of none", and a text that affirms the "essential unity of science and religion", the Guru Granth Sahib is universally regarded by Sikhs as having have been revealed directly from the divine, an aspect that has been attested to by the Sikh Gurus themselves in many of their verses.

“The servant of the Lord and Master enjoys the Love and Affection of the Lord. That which belongs ...

“The pure swans, with love and affection, dwell in the Ocean of the Lord, and subdue their ego.”

“Faith, contentment and tolerance are the food and provisions of the angels. They obtain the Perfe ...

“How can I go and meet the Lord? My mind and body are so thirsty for the Blessed Vision of His Dar ...

“without the Blessed Vision of my Beloved, how can I enjoy Him?”

“As the inner vision is awakened, one comes to know one's own home, deep within the self.”

“By great good fortune, I have obtained the Blessed Vision of the Guru's Darshan.”

“Please reward my faith, O Life of the World, O Great Giver. Obtaining the Blessed Vision of the L ...

“You bless everyone. Please bring my life to fulfillment. The body-temple is sanctified by the Ble ...

“Gazing upon the Fruitful Vision of His Darshan, I have been saved. Blessed are the hours, the min ...

“Gazing upon the Blessed Vision of His Darshan, my mind is fulfilled. O Nanak, with natural ease, ...

“Forever fruitful is the Blessed Vision of His Darshan; He is Infinite and Incomparable. He is Awe ...

“The burning within me has been extinguished, and my mind has been cooled and soothed, by the Bles ...