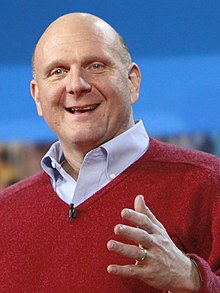 Steven Anthony "Steve" Ballmer (born March 24, 1956) is an American businessman who was the chief executive officer of Microsoft from January 2000 to February 2014, and is the owner of the Los Angeles Clippers. As of May 11, 2015, his personal wealth is estimated at US$22.7 billion, ranking number 21 on the Forbes 400. It was announced on August 23, 2013, that he would step down as Microsoft's CEO within 12 months. On February 4, 2014, Ballmer retired as CEO and was succeeded by Satya Nadella; Ballmer resigned from the Board of Directors on August 19, 2014 to prepare for teaching a new class and for the start of the NBA season.

The number one benefit of information technology is that it empowers people to do what they want to ...

My children - in many dimensions they're as poorly behaved as many other children, but at least on t ...

I want to express my deepest condolences at the passing of Steve Jobs, one of the founders of our in ...

Look at the product pipeline, look at the fantastic financial results we've had for the last five ye ...

I have lots of sources of information about what's going on at the company. I think I have a pretty ...

I don't know what a monopoly is until somebody tells me.

Our mail product, Hotmail, is the market leader globally.

I don't think anyone has done a [tablet] product that I see customers wanting.

Computer science is the operating system for all innovation.

Eventually the Internet will be accessed by PC, television, and wireless devices.

What we've gone through in the last several years has caused some people to question 'Can we trust M ...

We don't have a monopoly. We have market share. There's a difference.

“I like to tell people that all of our products and business will go through three phases. There's ...