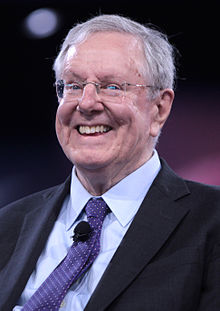 Malcolm Stevenson "Steve" Forbes, Jr. (/f??rbz/; born July 18, 1947) is an American publishing executive, who was twice a candidate for the nomination of the Republican Party for President. Forbes is the Editor-in-Chief of Forbes, a business magazine. Forbes was a Republican candidate in the 1996 and 2000 Presidential primaries. Forbes is the son of longtime Forbes publisher Malcolm Forbes, and the grandson of that publication's founder, B.C. Forbes.

I think the idea of trying to demonize Governor Romney's going to backfire. Their attempts so far ha ...

There is something fundamentally unfair about a government that takes away so much of people's money ...

Obviously, things can get derailed, particularly if, which looks more and more likely, you get a blo ...

The rise of China as a new power is another great challenge for the US. Our failure to properly hand ...

One thing on psychology, which we've always known, is that every investor says they're long-term - a ...

As more money flowed through Washington and as Washington's power to regulate our lives grew, opport ...

Our failure to properly deal with Germany and Japan early cost the world dearly later on. We dare no ...

Duarte is a moderate when it comes to civilian control of the military and curbing death squads. On ...

Start by scrapping the tax code. Don't fiddle with it. Junk it. Throw it out. Bury it. Replace it wi ...

Mr. Greenspan did a very good job in the early 1990's. But recently he's fallen prey to this crazy t ...

The phenomenon of home schooling is a wonderful example of the American can-do attitude. Growing num ...

We must guard against the overreaching hand of big government trying to take away our freedom. And w ...

“The phenomenon of home schooling is a wonderful example of the American can-do attitude. Growing ...

“I think when those hearings are held or completed, public opinion will be such that he will be re ...