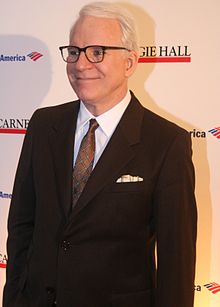 Stephen Glenn "Steve" Martin (born August 14, 1945) is an American comedian, actor, writer, producer, and musician. Martin came to public notice in the 1960s as a writer for the Smothers Brothers Comedy Hour, and later as a frequent guest on The Tonight Show. In the 1970s, Martin performed his offbeat, absurdist comedy routines before packed houses on national tours. Since the 1980s, having branched away from stand-up comedy, Martin has become a successful actor, as well as an author, playwright, pianist and banjo player, eventually earning him an Emmy, Grammy and American Comedy awards, among other honors.

A day without sunshine is like, you know, night.

I like a woman with a head on her shoulders. I hate necks.

You know what your problem is, it's that you haven't seen enough movies - all of life's riddles are ...

Boy, those French: they have a different word for everything!

I was raised with 'Laurel and Hardy' and 'I Love Lucy' and Jerry Lewis, and I just loved it. And I h ...

I feel good about being able to take bluegrass on to television like 'Letterman' and 'The View,' and ...

I think there are people out there writing original bluegrass songs, but it's hard to get them out o ...

It's a mystery to me the way that contemporary art galleries function.

I just believe that the interesting time in a career is pre-success, what shaped things, how did you ...

Everything is fraught with danger. I love technology and I love science. It's just always all in the ...

I never thought much about success early on. I only thought about being a comedian - or just being i ...