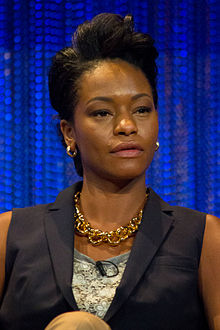 Sufe Bradshaw (pronounced Soo-fee) is an American actress, best known for her role as Sue, the acerbic secretary and scheduler to Vice-President Selina Meyer, in the HBO comedy series Veep. Her prior acting credits have included guest roles in Prison Break, Mind of Mencia, Southland, Cold Case and FlashForward, as well as a minor role in the 2009 feature film Star Trek.

I used to wait tables at Gladstone's, a seafood restaurant, day in and day out. I made some of my be ...

I was born on the west side of Chicago, and there was quite a bit of poverty. My family and I didn't ...

A handy pair of tweezers go a long way. You never know when you're going to have to pluck out a few ...

I've always been a creative person since I was young. I enjoyed art, museums, plays, but it wasn't u ...

A little secret about actors is that we never think we do a great job in auditions. We kind of just ...

If you think about 'Person of Interest' with Taraji P. Henson or 'Scandal' with Kerry Washington - a ...

Ever since I was a little teen, I was told by my great-grandma that you've got to always have a good ...

There's a lot of division in politics, and that is why I am grateful to be a part of a show like 'Ve ...

I'm a woman of lip gloss. Estee Lauder has an amazing lip gloss line. But I even go as far as to use ...

I had an amazing mother. She raised nine kids, practically as a single parent, which is the hardest ...

I really think that studying theater early on really helped me to be able to identify how to get int ...

When you come from a family of ten children you learn very early on in life to stand up for yourself ...

My passion for others and my experience as an actor and citizen of the world has naturally shaped me ...

Laughter is such a healing thing, and through laughter, we find commonalities with each other. There ...

I found it atrocious and downright infuriating to learn that one in three women on the planet will b ...