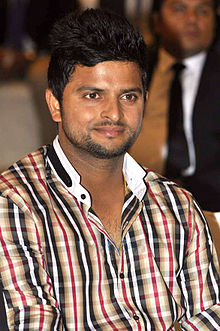 Suresh Raina ( pronunciation ; born 27 November 1986) is an Indian professional cricketer. An aggressive left-handed middle-order batsman and an occasional off-spin bowler, he is considered as one of the best fielders in world cricket. He plays for Uttar Pradesh in all forms of domestic cricket. He is the captain of Gujarat Lions in the Indian Premier League, and was the vice-captain of the Chennai Super Kings. He has also captained the Indian cricket team and is the second-youngest player to captain India. He is the first of the three Indian batsmen to ever score a century in all three formats of international cricket.

When you're successful, there will be friends, people, VIPs rallying around you. When you're down an ...

I am very close to my family. I have learned a lot from my father. He used to tell me to be honest w ...

I am getting better at facing the bouncers, as I know opposition tries to use those as a weapon agai ...

At home in Ghaziabad, everyone is a pure vegetarian. In fact, when I want to cook non-veg there, my ...

For me, fielding is everything - it is a passion that comes from within. You can get a bad ball whil ...

The shot of Kapil Dev kissing the World Cup and hordes of Indian fans all over at Lord's is etched i ...

I have time only for cricket, and when I am not playing, I love to be at home, chat with my family, ...

I am a great fan of Manchester United.

I used to practice at the hockey ground on synthetic surface while I was in the sports hostel, so Te ...

Celebration is big for me. From my younger days, when I used to win mementos while playing basketbal ...

My job is to perform, enjoy cricket and thank God for whatever he has given me.

My father was in the army, and there wasn't too much money. Yet, we learnt to enjoy the small pleasu ...

I always want to be known as a good Test cricketer. I believe I have the ability to score big runs i ...

I've always wanted to buy a sports car. After the England series, I went up to my dad and said that ...