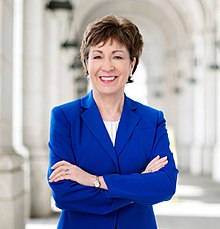 Susan Margaret Collins (born December 7, 1952) is an American politician who currently serves as the senior United States Senator from Maine. A member of the Republican Party, Collins has served in the Senate since 1997, and has served as the Chairman of the Senate Special Committee on Aging since 2015 and previously chaired the Senate Committee on Homeland Security from 2003 to 2007. She is considered one of the most moderate Republicans in office. She also is known for her long consecutive voting streak, which reached 6,000 votes in September 2015.

These are challenging times at home and around the world. We will have to work together in a biparti ...

When we're impatient with beginners around us, we would do well to sign up for a class in scuba divi ...

Leaders are like gardeners ... As leaders we are not only responsible for harvesting our own success ...

Like the canary in the coal mine, the climate changes already evident in the Arctic are a call to ac ...

We can never fully repay the debt of our proud nation to those who have laid down their lives for ou ...

We must pay close attention to the signals our body sends - the aches and pains, digestions and indi ...

Our success multiplies each time we lead someone else to success.

The most precious contribution we can make here on Earth is to create the lives we want to be living ...

Well, first let me say that I think health care reform is important. It has to be a priority. And ou ...

“I applaud schoolteachers, librarians, and most of all, our parents, for their commitment to teach ...

“This is extremely important to me, and I'll be back with this issue in determining how I should v ...

“It's very troubling to this committee that the forensic teams looking into failure of the levees ...

“It's very troubling to this committee that the forensic teams looking into failure of the levees ...

“That flip-flop sowed the seeds of doubt in the minds of commissioners,”

“Vice Admiral Thad Allen is a strong choice, ... He is a highly respected leader who should be ver ...