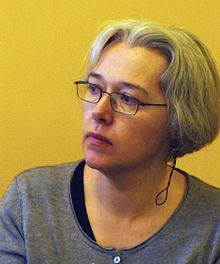 Susanna Mary Clarke (born 1 November 1959) is an English author best known for her debut novel Jonathan Strange & Mr Norrell (2004), a Hugo Award-winning alternative history. Clarke began Jonathan Strange in 1993 and worked on it during her spare time. For the next decade, she published short stories from the Strange universe, but it was not until 2003 that Bloomsbury bought her manuscript and began work on its publication. The novel became a best-seller.

I first became an Alan Moore fan in Covent Garden on a Saturday afternoon in 1987, when I bought a c ...

She doesn't do the things heroines are supposed to. Which is rather Jane Austen's point - Fanny is h ...

The phone conversations about a possible TV series of 'Jonathan Strange & Mr. Norrell' stretch back ...

You can get this feeling of the English or Scottish or Irish or Welsh fairy, but it is by nature ver ...

I have a scholar's love of silence and solitude. To sit and pass hour after hour in idle chatter wit ...

She wore a gown the color of storms, shadows, and rain and a necklace of broken promises and regrets ...

After two hours it stopped raining and in the same moment the spell broke, which Peroquet and the Ad ...

In some ways, 'Mansfield Park' is 'Pride and Prejudice' turned inside out.

Pride and Prejudice' is often compared to 'Cinderella,' but Jane Austen's real 'Cinderella' tale is ...

It is these black clothes," said Strange. "I am like a leftover piece of funeral, condemned to walk ...

The Emperor Napoleon Buonaparte had been banished to the island of Elba. However His Imperial Majest ...

The Emperor Napoleon Buonaparte had been banished to the island of Elba. However His Imperial Majest ...

I can write most places. I particularly like writing on trains. Being between places is quite libera ...