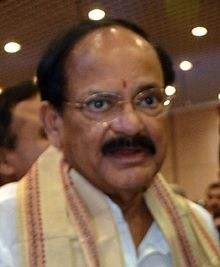 Muppavarapu Venkaiah Naidu (born 1 July 1949) is an Indian politician serving as the Minister of Housing and Urban Poverty Alleviation and Information and Broadcasting in the Modi ministry. A prominent leader of the Bharatiya Janata Party, he has also served as its national president from 2002 to 2004. Earlier, he was the Union Cabinet Minister for Rural Development in the Atal Bihari Vajpayee government.

“We are committed to the Common Civil Code, Article 370 and building of a magnificent temple at t ...

“It is not proper on Left parties to protest like this when a head of nation visit our country eve ...

“Despite opposition from several BJP leaders, Joshi decided to resign.”

“There is absolutely no question of his stepping down as the leader of opposition. We have accepte ...

“As far as the successor's selection is concerned, we are holding consultations and have almost ar ...

“Joshi has said that the audio cassettes earlier and the CD were being circulated with the intenti ...

“The Governor's decision to allow him (Singh) this much time is undemocratic. Also, it may give th ...

“The meeting felt that party should stick to its decision not to have any truck with either the DM ...

“Leaking information to media causes damage not only to the concerned individual but also to the p ...

“We are shocked by the news. We are praying for his speedy recovery.”

“We have no comments to make. We are waiting and watching the situation. As of now we are going it ...

“I hope the new party president would do something about it when he takes over, that he will talk ...

We are committed to the Common Civil Code, Article 370 and building of a magnificent temple at the b ...

“We do not understand why Dharam Singh has been given a week's time to prove majority when a vote ...