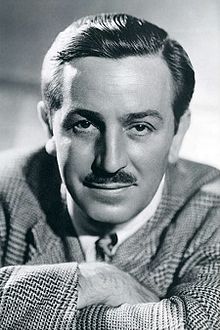 Walter Elias "Walt" Disney (/?d?zni/; December 5, 1901 – December 15, 1966) was an American entrepreneur, cartoonist, animator, voice actor, and film producer. He was a prominent figure within the American animation industry and throughout the world, and is regarded as a cultural icon, known for his influence and contributions to entertainment during the 20th century. As a Hollywood business mogul, he and his brother Roy O. Disney co-founded The Walt Disney Company.

A man should never neglect his family for business.

The secret of making dreams come true can be summarized in four C's.They are Curiosity, Confidence, ...

Movies can and do have tremendous influence in shaping young lives.

Disneyland really began when my two daughters were very young. Saturday was always Daddy's Day and I ...

I am in no sense of the word a great artist, not even a great animator; I have always had men workin ...

All of our dreams can come true.

Laughter is no enemy to learning

Why would I want to be president? I'm the king of Disneyland.

Today we are shapers of the world of tomorrow.

Disneyland will always be building and growing and adding new things... new ways of having fun, of l ...