Walter Bonatti (Italian pronunciation: [?valter bo?natti]; 22 June 1930 in Bergamo – 13 September 2011 in Rome) was an Italian mountain climber, explorer and journalist. He was noted for his many climbing achievements, including a solo climb of a new route on the south-west pillar of the Aiguille du Dru in August 1955, the first ascent of Gasherbrum IV in 1958 and in 1965 the first solo climb in winter of the North face of the Matterhorn on the mountain's centenary year of its first ascent. Immediately after his extraordinary solo climb on the Matterhorn Bonatti announced his retirement from professional climbing at the age of 35 and after 17 years of climbing activity. He authored many mountaineering books and spent the remainder of his career travelling off the beaten track as a reporter for the Italian magazine Epoca. He died on 13 September 2011 of pancreatic cancer in Rome aged 81, and was survived by his life partner, the actress Rossana Podestà. 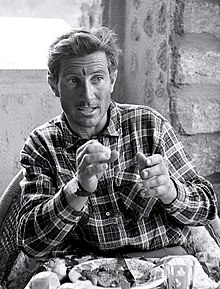 Climbing is not a battle with the elements, nor against the law of gravity. It's a battle against oneself.

I've always been incapable of accepting fate, and I've always refused to die, and that has helped me to survive.

If in normal conditions it is skill, which counts, in such extreme situations, it is the spirit, which saves.

I don't deny that there can be an element of escapism in mountaineering, but this should never overshadow its real essence, which is not escape but victory over your own human frailty.

For me, the value of a climb is the sum of three inseparable elements, all equally important: aesthetics, history, and ethics. Together they form the whole basis of my concept of alpinism. Some people see no more in climbing mountains than an escape from the harsh realities of modern times. This is not only uninformed but unfair. I don't deny that there can be an element of escapism in mountaineering, but this should never overshadow its real essence, which is not escape but victory over your own human frailty.

The mountains have rules. they are harsh rules, but they are there, and if you keep to them you are safe. A mountain is not like men. A mountain is sincere. The weapons to conquer it exist inside you, inside your soul.

The solitary ascent of the Dru had the immediate effect of expanding the horizons of my ideas about mountaineering. It made me aware of possibilities well in advance of the times, which were characterized by very restricted methods. This was how the superb pyramid of K2 surfaced once more in the list of my projects. But I chose K2 as a way for giving concrete form to my new concept of mountaineering: to climb the second highest mountain in the world solo, alpine style, and without oxygen.