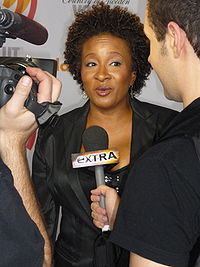 Wanda Sykes (born March 7, 1964) is an American comedian, writer, actress and voice artist. She was first recognized for her work as a writer on The Chris Rock Show, for which she won a Primetime Emmy Award in 1999. In 2004, Entertainment Weekly named Sykes as one of the 25 funniest people in America. She is also known for her role as Barb Baran on CBS' The New Adventures of Old Christine and for appearances on HBO's Curb Your Enthusiasm.

I had top-secret clearance and everything. I was working on a couple of projects that would keep me ...

We never hid anything from the kids. I feel whole again, I really do. I've told them, 'Mommy's boo-b ...

I'm a black, gay woman. I think the only way to make the GOP hate me more is if I sent them a video ...

You know what, I think maybe it's because men like to fart, and the host wants to be able to sit in ...

It's not until you develop your own voice, your own persona onstage that you become your own comic, ...

But I think funny and talent will always win out; I mean, of course there are hurdles, but I think i ...

And then also I think it's harder for women because comedy is so opposite of being ladylike.

I like doing a bunch of different things, being all over the place.

The first time onstage, a light went on. 'OK, this is my thing. I'm comfortable here. This is my thi ...

Sometimes black people really want to hold onto our oppression - 'This is ours! This belongs to us.' ...

I don't understand why people really get upset about something that doesn't affect them at all.

Whatever I talk about is what I'm interested in at the time. Politics are big with me. But being a m ...