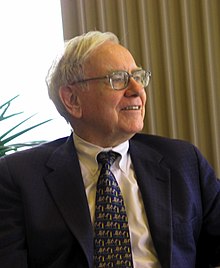 Someone is sitting in the shade today because someone planted a tree a long time ago.

Risk comes from not knowing what you're doing.

I buy expensive suits. They just look cheap on me.

The best thing I did was to choose the right heroes.

The line separating investment and speculation, which is never bright and clear, becomes blurred sti ...

People will always try to stop you from doing the right thing if it is unconventional.

I insist on a lot of time being spent, almost every day, to just sit and think. That is very uncommo ...

I don't have my diploma from the University of Nebraska hanging on my office wall, and I don't have ...

I don't have my diploma from the University of Nebraska hanging on my office wall, and I don't have ...

I will tell you the secret to getting rich on Wall Street. You try to be greedy when others are fear ...

The Fed is the greatest hedge fund in history.

If knowing history made you rich, librarians would be billionaires.

Asset values and earning power are the dominant factors affecting the valuation of a controlling int ...