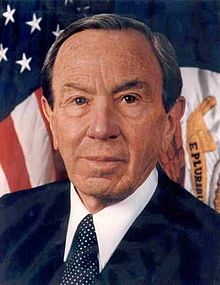 Warren Minor Christopher (October 27, 1925 – March 18, 2011) was an American lawyer, diplomat and politician. During Bill Clinton's first term as President, Christopher served as the 63rd Secretary of State. He also served as Deputy Attorney General in the Lyndon Johnson Administration, and as Deputy Secretary of State in the Carter Administration. At the time of his death, he was a Senior Partner at O'Melveny & Myers in the firm's Century City, California, office. He also served as a professor in the College Honors Program at the University of California at Los Angeles. At the behest of Al Gore, Christopher oversaw the Vice President's Florida recount effort in the aftermath of the disputed United States Presidential election, 2000.

Probably the most useful thing I can do as secretary of state is to assist the president in adapting ...

The United States has done more for the war crimes tribunal than any other country in the world. We' ...

We've had it very clear to the Bosnians that our obligation to equip and train their forces is compl ...

We have a human rights interest. Then there is the immigration problem. The human-rights violations ...

When I was a very young lawyer, I had a senior partner who advised me never to get mad, except on pu ...

We see considerable strain in Russia, and that's obviously a matter of concern to us. It's in the ve ...

It's very important to always put things in their historical contexts. It teaches important lessons ...

I'm very skeptical about the good intentions of Milosevic.

We've worked with President Yeltsin. He is the President of the country. He's been a reformer. We've ...

“We are answering in the only language that he (Saddam) understands, the language of force,”

“If we identify another nation as the source of the bombing, we should retaliate,”