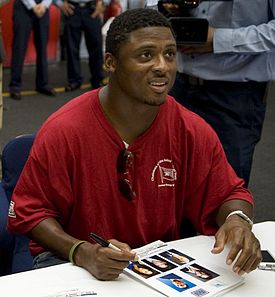 Warrick De'Mon Dunn (born January 5, 1975) is a former American football running back who played in the National Football League (NFL) for twelve seasons. He was drafted by the Tampa Bay Buccaneers 12th overall in the 1997 NFL Draft, after playing college football at Florida State. Dunn was named AP NFL Offensive Rookie of the Year in 1997 and earned three Pro Bowl selections in his career. After his playing career, Dunn took a minority stake in the Falcons' ownership group led by Arthur Blank.

“You could tell right then and there, we were going to come out and play, and that no matter what ...

“You've got 11 guys coming at you with their heads peeled back, wanting to knock you out. You have ...

“I've been through so much that I know when it's time to work, work. When you're away, take care o ...

“If someone knows me and they have a friend that's there, I've gotten a phone call.”

“The line has to make their calls, like who they've got if a safety comes up.”

“It was just so surreal, all of the things that we saw and that we experienced,”

“Overall, we were balanced offensively. We made some plays in the passing game to continue drives, ...

“We've been like the pioneers for the younger, smaller guys that come into the league now. What we ...

“He still has things to prove,”

“I've always told people that if I get an opportunity to carry the ball enough I'll pick up yards. ...

“It's always good when some of their best players are not in the game, obviously, but I don't thin ...

“This is a huge, huge game. Is it the Super Bowl? Not yet, but it's a playoff game.”

“I just tried to tell them that if we do things together we can touch more people and get more don ...