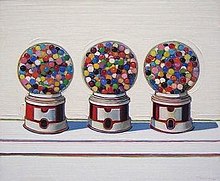 Wayne Thiebaud (born November 15, 1920) is an American painter widely known for his colorful works depicting commonplace objects—pies, lipsticks, paint cans, ice cream cones, pastries, and hot dogs—as well as for his landscapes and figure paintings. Thiebaud is associated with the pop art movement because of his interest in objects of mass culture, although his early works, executed during the fifties and sixties, slightly predate the works of the classic pop artists. Thiebaud uses heavy pigment and exaggerated colors to depict his subjects, and the well-defined shadows characteristic of advertisements are almost always included in his work.

I think of myself as a beginner. Sometimes that's the whole joy. If you could just do it, there'd be ...

I don't make a lot of distinctions between things like landscape or figure painting, because to me t ...

I'm not just interested in the pictorial aspects of the landscape - see a pretty place and try to pa ...

The Gold Rush and the Pony Express made Sacramento a substantial place in terms of enterprise.

Commonplace objects are constantly changingâ?¦ The pies, for example, we now see, are not going to ...

Discipline is not a restriction but an aid to freedom.

Diebenkorn was a very good critic, a very tough critic, tough on himself, tough on others. He expect ...

A painter is always overjoyed when anybody pays any attention to him at all, puts him in any categor ...

Painting is more important than art.

An artist needs the best studio instruction, the most rigorous demands, and the toughest criticism i ...

We all need critical confrontation of the fullest and most extreme kind that we can get. You can unn ...

The most important thing is that the work has to be solid [in terms of its formal structure] and tha ...

A conscious decision to eliminate certain details and include selective bits of personal experiences ...

I haven't the slightest idea what art is, but to be a painter is something of which you have to prov ...