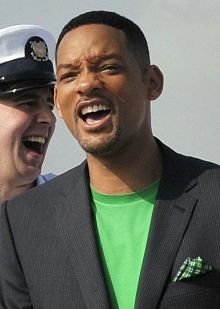 Willard Carroll "Will" Smith, Jr. (born September 25, 1968) is an American actor, producer, rapper, and songwriter. He has enjoyed success in television, film, and music. In April 2007, Newsweek called him "the most powerful actor in Hollywood". Smith has been nominated for five Golden Globe Awards, two Academy Awards, and has won four Grammy Awards.

Throughout life people will make you mad, disrespect you and treat you bad. Let God deal with the th ...

Money and success don't change people; they merely amplify what is already there.

The things that have been most valuable to me I did not learn in school.

Traditional education is based on facts and figures and passing tests - not on a comprehension of th ...

I think with movies I am really connecting to the Joseph Campbell idea of the collective unconscious ...

I had to focus and create a character in Bagger Vance, not just do my 'Will Smith' thing and get pai ...

Adolf Hitler was a vile, heinous, vicious killer responsible for one of the greatest acts of evil co ...

My school was 90 percent white, but 90 percent of the kids I played with were black. So I got the be ...

The things that have been most valuable to me I did not learn in school. Traditional education is ba ...

You want something? Go get it.

The central idea of love is not even a relationship commitment, the first thing is a personal commit ...

I truly believe that I can be president of the US if I really want to.

The women who don't seek attention are usually the women you need to be giving your attention to.