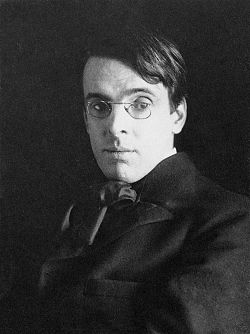 William Butler Yeats (/?je?ts/; 13 June 1865 – 28 January 1939) was an Irish poet and one of the foremost figures of 20th-century literature. A pillar of both the Irish and British literary establishments, in his later years he served as an Irish Senator for two terms. Yeats was a driving force behind the Irish Literary Revival and, along with Lady Gregory, Edward Martyn, and others, founded the Abbey Theatre, where he served as its chief during its early years. In 1923, he was awarded the Nobel Prize in Literature as the first Irishman so honoured for what the Nobel Committee described as "inspired poetry, which in a highly artistic form gives expression to the spirit of a whole nation." Yeats is generally considered one of the few writers who completed their greatest works after being awarded the Nobel Prize; such works include The Tower (1928) and The Winding Stair and Other Poems (1929).

Think where man's glory most begins and ends, and say my glory was I had such friends.

Education is not the filling of a pail, but the lighting of a fire.

Being Irish, he had an abiding sense of tragedy, which sustained him through temporary periods of jo ...

Do not wait to strike till the iron is hot; but make it hot by striking.

There are no strangers here; Only friends you haven't yet met.

Tread softly because you tread on my dreams.

People who lean on logic and philosophy and rational exposition end by starving the best part of the ...

How far away the stars seem, and how far is our first kiss, and ah, how old my heart.

This melancholy London - I sometimes imagine that the souls of the lost are compelled to walk throug ...

The worst thing about some men is that when they are not drunk they are sober.

You know what the Englishman's idea of compromise is? He says, Some people say there is a God. Some ...

The years like great black oxen tread the world, and God, the herdsman goads them on behind, and I a ...

We are happy when for everything inside us there is a corresponding something outside us.

Consume my heart away, sick with desire And fastened to a dying animal It knows not what it is, and ...

Consume my heart away, sick with desire And fastened to a dying animal It knows not what it is, and ...