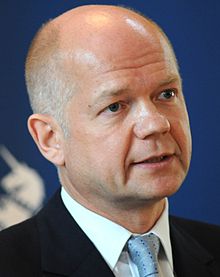 William Jefferson Hague, Baron Hague of Richmond PC FRSL (born 26 March 1961) is a British Conservative politician and life peer. He represented Richmond, Yorkshire as Member of Parliament (MP) from 1989 to 2015. He also served as Leader of the House of Commons from 2014 to 2015, as Secretary of State for Foreign and Commonwealth Affairs from 2010 to 2014, and as Leader of the Conservative Party and Leader of the Opposition from 1997 to 2001.

The appalling crackdown that we witnessed in Hama and other Syrian cities on 30 and 31 July only ero ...

We are not directly involved in Syria. But we will be working with our partners in the European Unio ...

To the teacher weighed down with paperwork, I say: you've been messed around too often. You came int ...

It's really necessary for the United States to continue to give strong leadership to the Middle East ...

When the Lord Chancellor violates the trust of his great office of state to solicit party donations ...

When we have a Deputy Prime Minister who tells people not to drive cars but has two Jags himself, an ...

Well, if you're looking for me to lead a normal representative life, well good luck finding a foreig ...

The EU is not a country and it's not going to become a country, in my view, now or ever in the futur ...

Where defining foreign policy as 'ethical' went wrong was that it implied that all decisions would b ...

The people of Britain want a Home Secretary who will give them back their streets. They want a Home ...

We hope that the long darkness through which the Burmese people have lived may now be coming to an e ...

Egypt is a sovereign nation.

You have to have as many defences in place as you possibly can. But even then of course - and it's i ...