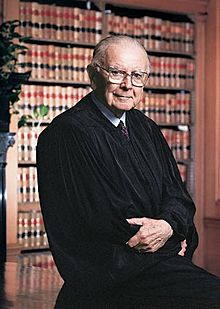 William Joseph Brennan, Jr. (April 25, 1906 – July 24, 1997) was an American jurist who served as an Associate Justice of the United States Supreme Court from 1956 to 1990. As the seventh longest-serving justice in Supreme Court history, he was known for being a leader of the Court's liberal wing.

“There are no menial jobs, only menial attitudes.”

“Sex, a great and mysterious motive force in human life, has indisputably been a subject of absorb ...

“We look to the history of the time of framing and to the intervening history of interpretation. B ...

“We look to the history of the time of framing and to the intervening history of interpretation. B ...

“We cannot let colorblindness become myopia which masks the reality that many "created equal" have ...

“No longer is the female destined solely for the home and the rearing of the family and only the m ...

“We hold that the Constitution does not forbid the states minor intrusions into an individual's bo ...

“The Framers of the Bill of Rights did not purport to "create" rights. Rather, they designed the B ...

“Appellant constituted a legitimate class of one, and this provides a basis for Congress's decisio ...

“Congress acknowledged that society's accumulated myths and fears about disability and disease are ...

“Use of a mentally ill person's involuntary confession is antithetical to the notion of fundamenta ...

“We current justices read the Constitution in the only way that we can: as 20th-century Americans. ...

“Sex and obscenity are not synonymous. Obscene material is material which deals with sex in a mann ...