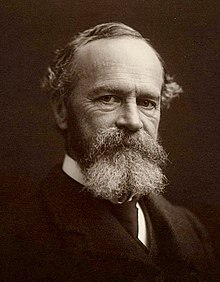 William James (January 11, 1842 – August 26, 1910) was an American philosopher and psychologist who was also trained as a physician. The first educator to offer a psychology course in the United States, James was one of the leading thinkers of the late nineteenth century and is believed by many to be one of the most influential philosophers the United States has ever produced, while others have labelled him the "Father of American psychology". Along with Charles Sanders Peirce and John Dewey, he is considered to be one of the major figures associated with the philosophical school known as pragmatism, and is also cited as one of the founders of functional psychology. A Review of General Psychology survey, published in 2002, ranked James as the 14th most cited psychologist of the 20th century. He also developed the philosophical perspective known as radical empiricism. James' work has influenced intellectuals such as Émile Durkheim, W. E. B. Du Bois, Edmund Husserl, Bertrand Russell, Ludwig Wittgenstein, Hilary Putnam, and Richard Rorty, and has even influenced Presidents, such as Jimmy Carter.

Believe that life is worth living and your belief will help create the fact.

Act as if what you do makes a difference. It does.

The art of being wise is the art of knowing what to overlook.

The greatest weapon against stress is our ability to choose one thought over another.

Whenever you're in conflict with someone, there is one factor that can make the difference between d ...

Success or failure depends more upon attitude than upon capacity successful men act as though they h ...

If you want a quality, act as if you already had it.

The greatest use of a life is to spend it on something that will outlast it.

The greatest discovery of my generation is that a human being can alter his life by altering his att ...

Why should we think upon things that are lovely? Because thinking determines life. It is a common ha ...

It is our attitude at the beginning of a difficult task which, more than anything else, will affect ...

Begin to be now what you will be hereafter.

A chain is no stronger than its weakest link, and life is after all a chain.

The deepest principle in human nature is the craving to be appreciated.