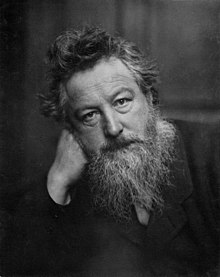 William Morris (24 March 1834 – 3 October 1896) was an English textile designer, poet, novelist, translator, and socialist activist. Associated with the British Arts and Crafts Movement, he was a major contributor to the revival of traditional British textile arts and methods of production. His literary contributions helped to establish the modern fantasy genre, while he played a significant role in propagating the early socialist movement in Britain.

The true secret of happiness lies in taking a genuine interest in all the details of daily life.

I do not want art for a few any more than education for a few, or freedom for a few.

Give me love and work - these two only.

No man is good enough to be another's master.

Not on one strand are all life's jewels strung.

We are only the trustees for those who come after us.

Speak not, move not, but listen, the sky is full of gold. No ripple on the river, no stir in field o ...

Yea, I have looked, and seen November there; The changeless seal of change it seemed to be, Fair dea ...

Large or small, [the garden] should be orderly and rich. It should be well fenced from the outside w ...

You may hang your walls with tapestry insread of whitewash or paper; or you may cover them with mosa ...

As to the garden, it seems to me its chief fruit is-blackbirds.

I pondered all these things, and how men fight and lose the battle, and the thing that they fought f ...

If a chap can't compose an epic poem while he's weaving tapestry, he had better shut up, he'll never ...

If there is a reason for keeping the wall very quiet, choose a pattern that works all over without p ...

There is no single policy to which one can point and say - this built the Morris business. I should ...