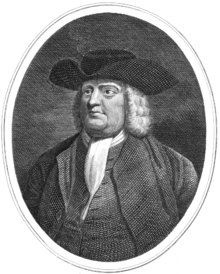 William Penn (24 October 1644 (O.S. 14 October 1644) – 30 July 1718) was an English real estate entrepreneur, philosopher, early Quaker and founder of the Province of Pennsylvania, the English North American colony and the future Commonwealth of Pennsylvania. He was an early advocate of democracy and religious freedom, notable for his good relations and successful treaties with the Lenape Native Americans. Under his direction, the city of Philadelphia was planned and developed.

The jealous are troublesome to others, but a torment to themselves.

Men must be governed by God or they will be ruled by tyrants.

For death is no more than a turning of us over from time to eternity.

Only trust thyself, and another shall not betray thee.

Excess in apparel is another costly folly. The very trimming of the vain world would clothe all the ...

Time is what we want most,but what we use worst.

Let us see what love can do.

Silence is Wisdom where Speaking is Folly.

If thou wouldst conquer thy weakness, thou must never gratify it.

Levity of behavior, always a weakness, is far more unbecoming in a woman than a man.

The wisdom of nations lies in their proverbs, which are brief and pithy.

Experience is a safe guide.