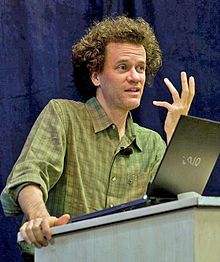 Yann Martel (born 25 June 1963) is a Spanish-born Canadian author best known for the Man Booker Prize-winning novel Life of Pi, a #1 international bestseller published in more than 50 territories. It has sold more than 12 million copies worldwide and spent more than a year on the Bestseller Lists of the New York Times and The Globe and Mail, among many other bestseller lists. It was adapted to the screen and directed by Ang Lee, garnering four Oscars (the most for the event) including Best Director and won the Golden Globe Award for Best Original Score.

Music moves me - duh - and that is like having a window opening on a heightened reality, but the eff ...

If you took the city of Tokyo and turned it upside down and shook it you would be amazed at the anim ...

Books are something social - a writer speaking to a reader - so I think making the reading of a book ...

In all big cities the style of life is the same. Same endless array of restaurants; same big museums ...

These people walk by a widow deformed by leprosy...walk by children dressed in rags living in the st ...

All living things contain a measure of madness that moves them in strange, sometimes inexplicable wa ...

Why do people move? What makes them uproot and leave everything they've known for a great unknown be ...

I'm looking at a dead event and trying to give it new life. In a sense, I'm a taxidermist.

If you write genre fiction, you follow the rules, and you have to follow them because readers expect ...

My zoology thesis was a functional analysis of the thyroid gland of the three-toed sloth. I chose th ...

How do you live with evil? Art is traditionally - certainly with my secular background - the answer, ...

Very few castaways can claim to have survived so long at sea as Mr.Patel, and none in the company of ...

Most of us get our history through story.

Religion is more than rite and ritual.

Zoo is an artificial territory, an approximation. Civilization is our natural territory.