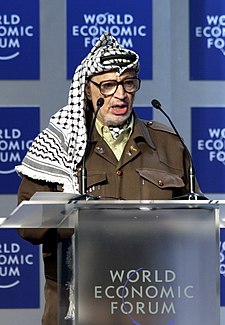 “This is my homeland no one can kick me out.”

“This is my homeland no one can kick me out.”

“Time is short and the stakes are high and the price of failure is more than any of us wants to pa ...

“Continued to press on soldiers of freedom! We will not bend or fail until the blood of every last ...

“We plan to eliminate the state of Israel and establish a purely Palestinian state. We will make l ...

“Peace for us means the destruction of Israel. We are preparing for an all-out war, a war which wi ...

“First of all, no one can bypass the Palestinian people and their choice of their leader.”

“[He said a small] window of opportunity ... believe our way of fighting terror won.”

“my new partner in the peace process.”

“We strive to achieve a comprehensive, just and lasting peace, ... We don't want a breakdown of th ...

“is more than realistic because according to the signed agreements ... our state should have been ...

“I can't forget myself, the peace of the brave, which I had signed with my partner, [assassinated ...

“It is clear and obvious [the Israelis] are trying to escape from implementing accurately and hone ...