“The data pricing trend is downward. We're expecting unlimited wireless broadband services in the $35-$45 range in the next year or so. There will always be a premium for wireless, but the objective is to get to the same price point as wired.”

“I think it's more of a one-month blip than an indication that the truck trend is starting to reverse.”

“We're concerned because it's part of a general trend in this administration. Far as we know, it's possible that they are like many other Americans - being spied on.”

“The trend is improving with relation to safety on the trails.”

“Behind these monthly fluctuations, mortgage lending is on a stable trend, though not as high as 2004 levels.”

“The trend is toward a stronger yen for a while. That direction strengthens concerns over exporters' earnings prospects.”

“That seems to be the trend most of the way around the globe, apart from Asia where there is a lot of BitTorrent. BitTorrent traffic levels are in decline.” 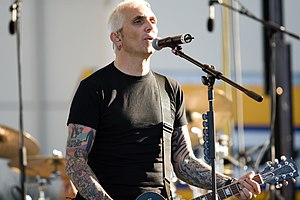 “Our album is bucking the trend, because you have so many bands that come out doing really well and then disappear. But we've been a rock band and done it the old-fashioned way. We've been around and had four hit singles off one record. We keep doing this slow incline.”

“[Braga (Star Trek: Enterprise) and David S. Goyer (Blade: Trinity) were frank about the trend toward genre TV in the wake of last season's hit show Lost.] There's [no] question that all ... of these shows probably won't survive, ... But I remember when ER and Chicago Hope both debuted, everybody was all, 'Oh, they're not [going to make it]. But they both [did]. ER [lasted] longer, but they both lasted for a long time. Two of [the new SF series] might survive, or maybe only one of them will survive. But I do think it's interesting. I mean, I've seen [Invasion and Surface]. I don't know if you guys have, but they're all really different. So it's kind of funny. I mean, they're all nominally science fiction shows that are dealing with aliens, but Invasion's very much small town, kind of Bodysnatchers. Surface is like The Abyss, kind of. And then ours is this weird kind of X-files-y [show], but also Twin Peaks-y.”

“This is a trend of foreign companies that are drawn to the very lucrative and very large China market to provide it the equipment and technology and the software and the services -- it's the whole range of IT [information technology] business -- in a way that reinforces an already state-of-the-art surveillance and information and social control system. These companies are all contributing to and built one of the most effective architectures of censorship and control in the world.”